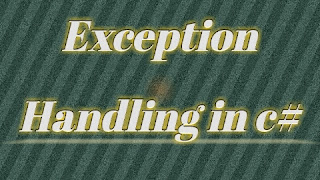 Exception can be generated by the Common Language Runtime (CLR) by third party library or by the application code using the throw keyword.

How to use Exception in programming

try
{
//statement that can cause Exception
}

finally
{
//Statement to clean Up
}

Some Important points about Exception Handling

1.Exception are types that all directly or indirectly derived from System.Exception class.
2.Exception object contains detailed information about the error, such as the state of the call stack and a text description of the error.
3.A try block is used to throw multiple exception that can handle by using multiple catch blocks.
4.More specialized catch block should come before a generalized one otherwise a catch block will never be executed.
5.Exception can be generated by a program by using the throw keyword.
6. If no exception handling mechanism is used, the program stops executing with an error message.
7.By providing a catch block without a brackets or arguments, we can catch all exception occurred inside a try block.

A simple program of Exception Handling

Attempted to divide by zero.
Press any key to continue . . .

In this program occurs an exception (DivideByZeroException) in  Try Block and Catch Block handle the exception. And display the message of the Exception.